Okta is the leading solution for user authentication and single sign-on (SSO) for workforce as well as customer identities. Okta is capable of managing SSO to wide range of applications along with multi-factor authentication, directory integrations and lifecycle management from the cloud.

SailPoint IdentityNow is a cloud based identity and access management solution which aims to provide identity-as-a-service. IdentityNow enables a complete set of IAM capabilities delivered from the cloud to manage hybrid IT environments that include on-premises and cloud resources. IdentityNow supports SAML based Single Sign On. SAML is an open standard which allows an identity provider (like Okta) to pass on authentication information to a service provider (like IdentityNow).

In the following demonstration, we take a look at the SAML integration of IdentityNow with Okta for Single Sign-on. We will also go over the Active Directory integration in Okta and how this can be backed by IdentityNow’s lifecycle management.

SailPoint IdentityNow provides a complete solution to manage Oracle E-Business accounts data, passwords, and access with it’s connector. The user management and the assignment of roles and responsibilities can be simplified and streamlined using IdentityNow. This integration also facilitates implementation of Segregation of Duties (SoD) policies in real-time, enabling role based access and performing user access reviews.

In this presentation, we will overview of Oracle EBS and its integration with IdentityNow for user access management including the pre-requisites and the connector APIs.

The following demonstration includes the basic integration process along with role based access control for Oracle EBS.

The following presentation discusses the need for credential cycling and how it works:

The following demonstration illustrates a use case where credential cycling is configured with the CyberArk PAM solution:

The next video demonstrates credential cycling when configured with the Thycotic Secret Server PAM solution:

The following presentation describes privileged account security and the architecture of a CyberArk implementation. The various components of the CyberArk architecture and their functionalities are also discussed.

The following presentation discusses split-brain scenario in a CyberArk implementation and how it can be resolved:

Monitoring and analysis of events that occur on a system is crucial to identify threats and generate timely alerts. It is also significant to identify by whom such events were caused if it was triggered by a user. Sailpoint IdentityIQ allows us to keep track of identity activity on various targets using Activity Data Sources. When configured, this allows us to track activity like logon times, security events, or application activity among other actions.

The following presentation discusses how Activity Data Sources can be configured on IdentityIQ for basic Security Information and Event Management (SIEM) with an example use-case:

The following demonstration presents the use case for identifying activity based policy violations by setting up Activity Data Sources:

In an enterprise, a large number of privileged accounts are spread over various applications and systems. These accounts have higher authorizations and hence need to be handled with higher security. CyberArk‘s Privileged Account Management solution is targeted at achieving this.

In SailPoint IdentityIQ, accounts can have the highest privilege in form of the ‘System Administrator’ capability. The ‘spadmin’ account that comes out-of-the-box is configured to have this privileged access. This account, if managed by the CyberArk PAM solution, improves safety of the IdentityIQ environment.

The following presentation discusses this use case and how it can be implemented using CyberArk PAM:

The following video demonstrates the use-case in action for verifying and changing spadmin password from CyberArk and initiating privileged sessions:

Email is the most powerful tool for enterprise level communication as it provides accountability and reliability in communication. To an organization, the emails that are received by the employees are a valuable resource. When an employee resigns or is terminated from the company, the organization might still need access to his/her mailbox. This is especially significant in sales, support and administration activities as it can impact the organization either directly or indirectly. This scenario can be addressed by allowing an authority within the organization to access the de-provisioned mailbox and is an important challenge within identity and access management. The risks and compliance guidelines associated with this approach are also factors that need to be considered.

Sailpoint’s IdentityIQ is shipped with a connector for Active Directory. This connector supports management of users, groups and mailboxes on Exchange server. However, for modifying the mailbox permissions, native rules need to be configured in order to execute the corresponding PowerShell scripts.

The following presentation introduces a scenario where handling mailbox permissions would be required. After an overview of native rules, the implementation of this use case is also discussed.

The following demo focuses on granting Exchange mailbox permissions via IdentityIQ and verifying that the changes are reflected on the mail server.

Every object in Sailpoint is stored as an XML file. The existing XML objects can be explored from the “Debug Pages”. XML files are useful while adding new objects. This can be done using “Import from XML” under Global Settings. Any object like rules, certifications, system configurations, email templates, etc. can be created using XML.

Each of the objects is represented by its respective XML tag and has its own structure. For example, rules are referred with the <Rule> tag, tasks with <TaskDefinition> tag, email templates with <EmailTemplate> tag.

An XML file with only one object begins and ends with a tag corresponding to that object type. However, it is a better practice to always wrap the objects with the <sailpoint> tags as this offers more flexibility. This approach also enables to import multiple objects defined in the same XML file.

For example, two XML files can be combined into a single file: 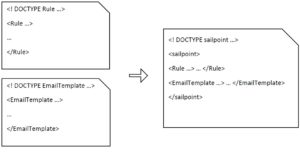 Taking the approach of using a single XML file is extremely useful for deploy-ready and stable objects. Doing this in general will reduce the modularity which raises few concerns:

Due to these reasons, it is better to combine tested and stable XML objects instead of objects that are still in development.

The usage of this approach can be observed in the “init.xml” file that comes with Sailpoint. This file contains all of the objects required for the basic features of the product, packaged into a single XML file.